I went to the airport to tinker with Randy's wiring again.

There was a barbecue going on in Ken's hangar, and Mark (who I flew up to Auburn a while back) showed up in his mint MGB. 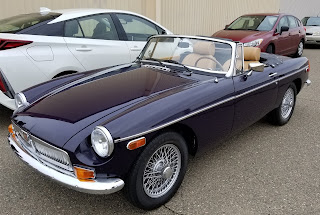 Mark took me for a little ride in the thing - it sounds great, especially as I'd driven there in the almost silent Bolt :o)

After lunch, we peered at Randy's wiring - we removed the inline filter we'd installed at the weekend, as it's not helping.  Ken reckons it's the audio plug causing it, and suggested using a mono plug instead.  Testing it shows this works, but I still don't get why it being powered up causes the noises.  Whatever, Randy's ordered a new plug.

My DHL package arrived, and luckily Vic was there to receive it.
Posted by Dug at 1:44 PM