I went to the airport to meet Shane, only to watch a big pall of smoke in that direction most of the way there.  There was a grass fire on the other side of the runway, so we watched Cal Fire's trucks show up and beat that down while dumbasses carried on flying circuits, through the smoke at the 15 end of the runway.  Sheesh.  Eventually somebody announced the airport closed, and we collected Shane's windscreens and headed to Home Depot to buy an 8'x4' sheet of Lexan (tm).

When we got home, we left the van in the driveway and went and got lunch, then came back and argued about the best way to deal with cutting new windscreens out.  Eventually we cut the sheet in half (because you can get both screens out of a 4'x4' sheet) and decided to get the nerds at Shane's work to do it with one of their fancy cutting machines.  Only it was a nightmare getting even a 4'x4' sheet into Shane's car, so we loaded the now 2 sheets into the van and dropped them off at Shane's ready to be worked on.

We took a walk around the campus as I've never been there, then I dropped him home and went home myself.

I went and picked Shane up, as he was vehicularly deficient, then picked Vic up and we went to the airport to fly up to Auburn to meet PJ for brunch.  It was a bit smoky due to the Yosemite fire :o(

After lunch, Shane flew straight back to Lincoln, and Vic and I did our monthly lake fly past... it's starting to go down.

Shane and I changed his windscreen, then we headed out.  We dropped Vic at home, then I ran Shane home, getting back with ~20 miles of range left.

We charged the car to 100% and drove down to Manteca to have Dave's kids cook us pizza in their new oven.  Got home with >100 miles remaining :o)

I took the day off so I could go to the dentist.

After the usual tooth scraping, I went to the airport and tinkered with the plane for a while - mostly doing smaller things I haven't had time to get around to.

It was going to be a hot day, so we went and met the family Shane and Randy for breakfast at a place Shane and Liza have been going to once a week for years.

Afterwards, we just pottered around the house doing nothing, but I went and met Randy and Shane at Lincoln so we could go for an evening flight - there's still a guy with a Magni based at Auburn we haven't met yet, so we thought he might be flying and we could see him.

We wandered around the dead airport, just chatting, when a couple of guys with a Cessna (I think) 206 at the fuel island called out to us.  They were almost out of fuel, and the credit card reader was down so they couldn't get any more to get back to Reno.  I pointed out Lincoln should have gas, and was only 13 miles away.  We came up with a plan - I'd fly back to Lincoln, and call them and say whether they could get gas there.  If not, we'd call PJ and see if Cameron Park had gas - that's about 14 miles away.  In the meantime, Shane and Randy found a guy with gas in his plane who'd drain some out so they could comfortable get to Lincoln legally (they had about 10 gallons, but in a plane that burns 18 gallons an hour, they'd be landing with less than 30 minutes.)

So, I flew back to Lincoln, taxied over to the pump and watched another plane from Auburn start pumping gas, then called back up to Auburn to say "all good, come on down."

Randy and Shane had left shortly after I did, so we put the planes away and did our paperwork while waiting for the 206 to arrive, then drove over to the fuel island with water and juice boxes and chatted to the guys as they filled up.
Posted by Dug at 8:31 AM No comments:

I met Shane at the airport, where we flew to Watts-Woodland for their display day.  It's the first time we've been to a display day there, and it was a lot quieter than Colusa, so Shane had a better time than he did on that trip.  The dog-leg as we approach Woodland is me flying around a crop duster :o)

We chatted to various people about various things, and saw various aircraft we've seen in various other places :o)  I did get to meet Bob, Jarron's gyroplane mentor from the Nut Tree, and we're going to talk about what to do with his aircraft.

On the way home, as we were under the Sacramento International Class C step, Chris passed us in his RV-6A, and I shot a short video of it.

I also listened to NorCal approach talking to SouthWest jets about us - we were at ~1000', and were allowed to be up to 1600' so everything was fine.  The first jet went above us at ~2000', and the second jet saw us (we were East of him by then) and said we looked like "a couple of helos" :o)

At home I threw together a video of my landing at Watts-Woodland.

I went to the airport, where Shane and I fiddled with EGT probes.  We now have 3 working as expected, and he'll order a replacement for the 4th one that we knew was borked.

Jeff, a Sonex pilot from Kansas who's been taking gyro lessons in Petaluma, joined us, and when Randy had finished cleaning his pre-rotator bendix, we flew up to Auburn for lunch - Jeff went with Shane.

We headed back after lunch, and sat around the hangar chatting until it got too hot to stay there.

We got up ridiculously early and met Shane and Liza at the airport, where we flew to Colusa for their Old Tyme fly-in.

After an uneventful flight there, we had a pretty eventful arrival (as usual.)  Kurt was on a long base leg, so I said we'd extend and come in behind him, then an orange Cub that didn't seem to be on the radio cut in on my on finals - I was number 2, and there were at least 2 people behind me.  I slowed down and let him land, but Shane had to go around as I was still on the runway when he got there :o(

The flight back went off uneventfully, and we ended up getting lunch before heading home.

At home, I tinkered around with a couple of videos...

Landing at Colusa
Steve's fly past

Today was Independence Day, when Americans celebrate leaving the Empire by going shopping and blowing sh!t up.

After a pretty restless night, I got up and headed to the airport to fly to Oroville for their 4th July fly-in. 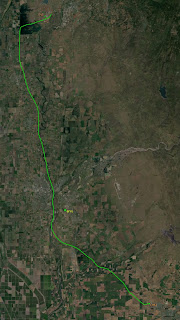 Thanks to a healthy tail wind, I got there before Chris, Tim and PJ.  Steve was offering to go behind me in the SNJ, and I pointed out that I was showing 54kts ground speed so I'd go behind him.  I went a little further South to give him some space, then watched him do a fly past as I flew downwind.  He was pretty close behind me on landing, so I flew almost all the way to the taxiway before plopping it down.
When we were all done talking to people, we headed home.  There was a crop duster just West of Lincoln who I flew over - I was at ~1300', he was at ~200'.
When I got home, I threw together a few videos...
Flying past Sutter
Landing at Oroville
Landing back at Lincoln
Posted by Dug at 9:04 AM No comments:

I picked Randy up on the way to the airport and we had a bumpy flight up to Auburn to meet Chris and PJ for lunch.

After lunch, we flew home.

Randy's oldest fuel pump had failed, so we replaced it with a new one.  Well, because he hadn't labelled it, we replaced the good one, then had to replace the bad one with the good one, and tested them to make sure everything was fine now.  And labelled them.

In the evening, we watched "Shang-Chi and the Legend of the Ten Rings," the dealt with Tilly's distress at being able to hear the fireworks over at the Sun City community.

I met Shane (and Ms Shane, and boyfriend) at the airport.  We had breakfast at the EAA hangar, then took the kids out for a short flight.

After the flight, we started playing with Shane's EGT sensors when Bill and Jody showed up, with William asleep in the car.  I chatted with Jody while Bill and Shane looked at the sensor, and found that there was a broken wire at the sensor.  Luckily we had a spare.  That was too short.  We took the old one out, cut the wire off it and used it to plug the hole in the exhaust, and Shane'll get the extension kit.  I zip tied everything back where it was supposed to be, and then went home.

In the evening, we watched "Dr Strange."  I've seen it before, but Vic hadn't, so now we're primed for the rest of the magic MCU.

A new month, so here are the stats: