What's all this about winter is coming?

I've taken the week off to do things and stuff, and I kicked off the day by taking Tillamook for her annual inspection.  She was very happy to get into the van, less so when we pulled up at the vet.  You call in and tell them you're here, and the vet tech calls back for a chat, then they come and get her.  You then play Flappy Bird until the doctor calls you back for a chat, and then they call you and deliver her back so she can grumpily ride home again.  She got a couple of vaccines, and was feeling sorry for herself for the rest of the day, but they said she's in great condition for being 13 years old.  They did point out the muscle wastage on her back legs, which is due to the arthritis, and took blood so we can look at NSAIDs if necessary in the future - they're hard on the liver and kidneys so she'd be getting blood tests every 6 months or so. 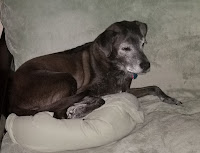 I ran around trying to get some stuff done, but mostly ended up getting a package of Oreos and posting some fuel valves back to Aircraft Spruce.

I went to the airport and took the plane out for a bit - I timed it perfectly as the GPS flicked into "night" mode while I was on finals (I'm allowed to fly to the end of civil twilight - usually about 30 minutes more, but I like putting the plane away in the light.)

As it was dark when I got home, I could see that some of the neighbours have their Xmas decorations running - while Tilly ate her supper, Vic and I went and watched them for a little while.  My phone didn't pick up the sound as well as I'd hoped, but whatever.