Randy and I flew to Auburn to meet the Georgetown campers for breakfast.

After breakfast, we flew to Cameron Park to look at one of the carbs on the RV-12 that Chris is trying to sell - it's been leaking.  On the way, we picked up Paul, a Magni pilot from Petaluma who was flying to Tahoe, when he called to say he was going to be passing Cameron Park.  We met at Cameron Park and chatted for a while before he continued.

After a lot of work replacing gaskets and floats and bending parts, we realised that the float bowl wasn't fitting properly.  We're not sure why, but a little filing and an application of a mallet managed to get it all back together so it stopped leaking. 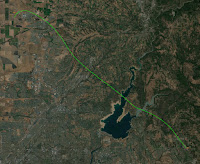 I flew back in the fairly unpleasant headwind from the North - Randy had left earlier to get to some family dinner thing.