I'm feeling a bit better, so I went to the airfield to help out with the hangar work party.  On the way, I saw Steve towing his gyro (well, at first I was "WTF is that?"), so I followed him in.  He taxied it around, but isn't ready to fly it yet. 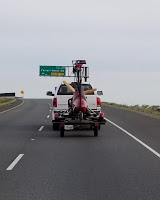 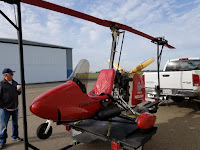 We did a bunch of sealing around the edges of the hangar, and some insulation on the walls.

After we all got tired out, I went home and installed some new LED side marker lights on the van - they're for a Mercedes SUV, and a little smaller than the VW ones, but the mounting holes line up just fine, and they're nice and red rather than the faded pink of the old ones.

I went back to the airfield, and took the plane out for a little potter around, then went home and watched "The Last Jedi".
Posted by Dug at 1:53 PM