We got up early and headed to the airport to meet Ken and Jamie, wait for Chris then head out to the Colusa fly-in.  It was a fairly uneventful flight over, but there was a lot of activity with people arriving once we were near - a group of Piper Cubs all landed at once, and I head "finals, number 7" at one point.  Luckily everybody was down by the time we got there, and I pulled off a great landing in front of the crowd :o)


We had breakfast (pilots don't have to pay :o)), then Chris won a case of oil he can't use and some rice in the raffle.  Luckily we ran in to Bruce and Scott, and Bruce offered to take it back to Lincoln for us.

After looking at the planes for a while, it was obvious that people were starting to head out.  We flew back to Lincoln, and Chris to Cameron Park.  After I put the plane away, we chatted to Dan who'd flown over in his RV-10, but turned back when he saw how busy it was :o) 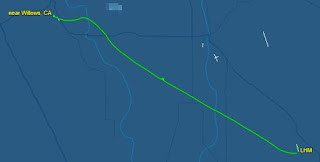