I got up early and headed to the airport, where I flew to Georgetown to meet Chris.  It's the first time I've been there, and there wasn't anybody about, so I landed on 17, as the wind sock seemed to favour that.  The runway drops off into a ravine, and I found it a little disconcerting to come in and land there, as everything just looks odd.  Chris arrived while I was spinning down the rotors, and I told him there was pretty much no wind, so he landed on 35.  We took off on 35, while a guy not on the radio looked like he was downwind for 17, but he turned away.  I was shooting video, so I thought about running low off the end of the runway, but figured I'd have to worry about hitting Chris, so I just did a normal takeoff.  We circled round over the airport, then headed towards Tahoe, dropping down in to a couple of canyons.

Despite a whole discussion about being warm enough, Chris decided he should have worn a jacket by the time we were at about 5,000', so he landed on a fire trail to stop and get his jacket on.  I just flew around him in circles until he took off again, and we headed back towards Tahoe, flying over a couple of lakes and ridges before getting there.  By the time we got there, I was a little concerned about gas, as I was between 1/2 and 3/4 of a tank, and we were expecting a 15mph headwind on the way back, so we flew for a short way along the coast of the lake before heading back.  At least I've now had the gyroplane over 10,000' (previous record for me was ~4,500').  Of course, we didn't have a bad headwind on the way home, and going downhill meant I got to Auburn with just under 1/2 a tank.

We had brunch while waiting for Randy to show up from Lincoln, then waited for a paint match guy to show up and scan Randy's white and Chris' 2 different red paints, then we split off and went home - I went straight back to Lincoln, Chris went back to Cameron Park and Randy took his daughter on a short sight seeing trip on the way home.  Just under 3 hours, on about 13 gallons of gas isn't too bad - I usually fly a lot slower than Chris, so I usually burn less gas than that. 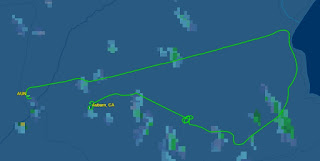