I went and met Randy at the airport, and we took the gyros out.  We did a touch and go and go at Sutter County, then flew around the North of the Beale class C airspace.  We talk to each other on 123.45 while we're flying, and could hear 8 Cubs talking to each other on that frequency who were hopping up and down in a river somewhere.  I called them, but I don't think they could hear me, as I was concerned that the river they were talking about was the river we were flying along at the time.  After I heard one of them mention the Van Dyke (private) airport, I realised they were on the other side of Lincoln.  Anyway, we were all heading back towards Lincoln, and they landed a few minutes before we did. 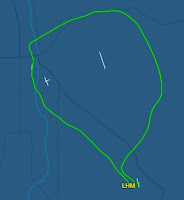