I started the day at the airport, tinkering with my squeaky brakes on the plane.  The new brake pads are slightly bigger than the old ones, so I think the lip that's being ground into them is causing a squeak.  So I took that lip off with a Dremel - let's see if that changes anything.

Randy showed up (late) and we flew up to Auburn to meet Chris and Vic for brunch.  I'd hoped we could play with Chris' new Insta 360 camera, but he was in the RV-6A.  Here's a video he's previously shot in that though :o)

Randy had his younger daughter with him, and she's never been down one of the canyons, so we flew the North Fork of the American River on the way back - I think she enjoyed herself :o) 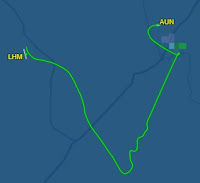 As usual, the ADS-B tracking stuff doesn't like it when we drop below the rim of the canyon :o)