I got up early and picked Randy up on the way to the airport.  The plan was to fly to Gnoss, then on to Half Moon Bay if the weather was up to it, but there was a SIGMET for turbulence East of the Coastal Range.  I got beaten about, and was up to almost 3,000' when I decided to give up and go home - Randy agreed, but Chris (who was further South at 5,000') said he was carrying on.

The wind was at or above 40mph, and we saw a ground speed of around 30mph for sections of the trip back.  Randy suggested we go to Auburn for lunch, so we headed up there - it was a lot clearer and less bumpy the further away we got from the hills.

We flew the North Fork canyon on the way home, and hit a little turbulence on the way back to Lincoln. 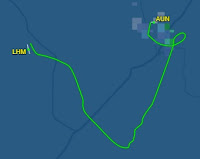