I picked Randy up on the way to the airport, then we flew to Auburn to meet Chris, Kim, Victoria and Vic for breakfast.

On the way back, the plan was for Vic to take pictures of us in the North Fork canyon.  She got screwed up and got there pretty much at the same time as we did, so that didn't work out.  We were also higher than usual, as there was some guy with a line across the canyon.  I did turn my GoPro on, but then it took one picture and then stopped recording, because with it mounted to the mast, I can't see what it's doing.  Chris also didn't bring his Insta 360 out, so we'll just have to do it again some time :o) 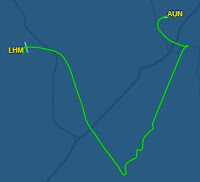 Chris headed out early to get home to watch the Superb Owl, and Randy and I pottered along the shore of Folsom Lake before heading home.
Posted by Dug at 12:00 PM