Randy's bought a Chevy Bolt down in Lancaster, so needed to go and get it.  Chris was going to take him in his RV-6A, but Randy needed to get to Cameron Park.  He'd talked about flying his gyro over and leaving it out overnight and having me take him over to pick it up on Sunday, but I pointed out that it would make more sense for me to take him over on Saturday morning. 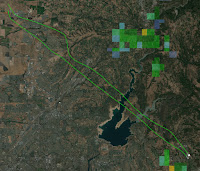 When I got back to Lincoln, I went and had breakfast at the EAA hangar before heading home.

Vic had taken Tilly to the dog park, so Tilly spent the rest of the day whining about her poor feet, her poor legs, her poor back and so on.  She got a couple of rubs of the CBD roller in her ears, and that fixes everything for a few hours :o)

Randy picked up his car, and I fielded questions that the damn Chevrolet dealer didn't seem to know the answer to about the recall (that's affected 5 cars in the whole fleet so far - far more internal combustion engine'd cars have burnt up in the same period.)  I then talked him through his first DC fast charge  on his way home, and helped figure out his next stop.

Oh, and we watched "Iron Man 3."  I'd been disappointed in "Iron Man 2" so never bothered watching it.