Randy wanted to go for a flight before heading down to Disneyland for a few days, so we went for a flight along the Bear Creek. 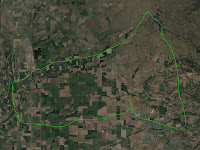 We chatted to Bill for a while when we got back, then I dropped Randy home.

Vic and I had looked at getting her a new bicycle earlier in the year, but there was nothing available.  We have talked about the Rad Mission as a beginner electric bike, but the Trek dealer in Folsom was listing an orange Dual Sport 3 in stock, so we went to take a look.  It was in the warehouse, unbuilt, so we couldn't look at it, but she sat on the right size in the wrong colour (but couldn't ride it because it was sold,) and saw the right colour in the wrong size, and liked it so we paid for the one in the warehouse intending to pick it up next weekend.

And then they called to say it was actually already built so we could go back and see it and take it home if she wanted it, but we missed the call.  Oops.

I got to track down and fix a problem with one of the speakers at home, and replace a malfunctioning timer switch for the house fan.  Progress.

In the evening, we watched "Thor: The Dark World," so I believe I'm currently up to date on Marvel movies.

I asked Tilly who's her favourite, and she looked at Vic, then went and stood by her, leaning against her.  So, if anybody wants a dog, she'll be tied to the lamp post out the front of the house.