I went and met Randy, Shane and Liza at the airport, and we headed out for Colusa.  The plan had been for Shane to practice a landing there before the big fly-in later in the month, so he didn't have to worry about doing a go-around in front of a load of people, but we turned back as Randy's fuel pressure warning went off.  He cycled the pumps, and it looked fine again, so we carried on, but stopped to take a look at the wiring.  We found a loose connector, then carried on our merry way to Willows, where we met Bill, Chris, Tim and PJ, and met an Autogyro MTO pilot called Steve from Petaluma.

After lunch, we headed back to Lincoln, making pretty good time with a tail wind. 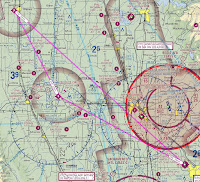 When we got back, Jarron was out in his Air Command, and we heard him coming back on the handheld radio I've just recently left in the hangar :o)  We all went out and watched him land, then chatted while I went over my left carb that seemed to be leaking when I looked at it at Willows.  Everything looks fine, so I changed the choke gasket as it looked like that might be the problem, and it pressure tested OK.  Hopefully that's fixed.