We met Randy at the airport, then flew to Amador - not been there before, but we've flow over it several times. 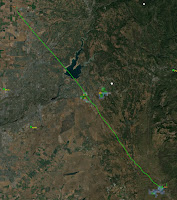 The "squiggles" (Vic tells me this is a technical term) is me climbing ~1,000' to get to the airport, while trying not to overrun Randy.

It's interesting, we landed downwind and uphill, because that was the direction all the locals were using.

Randy then went home to have lunch with his kids before they go to camp, while we flew on to Columbia for their fly-in.  As there was nobody in the pattern, we took off the proper way.  I later met a local who said landing that way is a nightmare in the turbulent wind, but I'd rather take off downhill, personally. 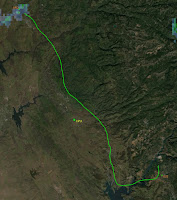 They had a temporary tower, and the controller didn't understand gyros at all - first he had me go out to the lake to join the pattern, meaning I was a lot further out than I normally would aim for, then he told me I could land on the apron - I pointed out that I needed forward speed, so I'd rather slot in behind the Cessna that'd just flown overhead :o)

We spent a lot of time talking about the gyro, because we had the only one there.  When it was time to leave, there was a plane waiting to cross the runway, so I told the controller they could go, as I'd need a little while to pre-rotate.  I then sat there, at 200 rotor rpm while half the planet crossed the runway, before getting to go for it.  It was pretty windy on the way back, so we headed out to the valley to get out of the worst of the turbulence.  Still, a 10-20kt headwind pretty much the whole way home meant it took us a while to get back, and as it was too windy for a lot of the fixed wing guys, I just did a straight in approach.  Because I'm lazy, and was pretty tired. 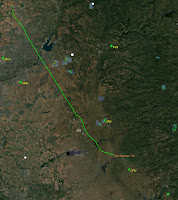