It's been raining pretty much all week in Roseville, but despite the ground being waterlogged, I cut the grass - it needs it.

I've bought a Supermoto appearance kit for the DRZ on Fleabay, but it wasn't new (as sold) and is missing a couple of fittings.  I came to an arrangement with the seller, then went and found some fittings that'll do and mounted it.  It doesn't look half bad. 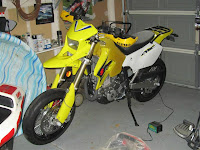 I think it'll probably make the bike a little more stable, as it's stiffer than the Acerbis supermoto mudguard that was on there before.  When if stops raining, I'll take it out and see :o)
Posted by Dug at 7:05 PM