We headed over to the California Auto Museum for a meeting of the Vans - there's an exhibition of VWs at the moment, and the air cooled mob had an informal show in the overflow car park. 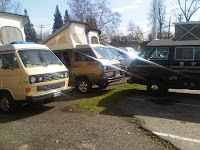 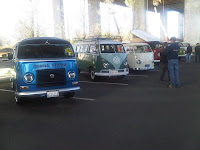 We parked a bunch of vans together, then went for a wander around the air cooled show.  We left, leaving everybody else to go into the museum, and met Vince for lunch.

In the early evening (it doesn't start to get dark until 7ish, now the clocks have changed), we watched Dale and Tucker vs Evil, a silly and funny film.  It was quite enjoyable :o)
Posted by Dug at 7:12 PM