I went to the airport and spent some time getting the cabling in from the back of the plane to the radio.  And huzzah!  It works!

I took the plane out for almost an hour, and pottered around for a while.  With all the new bearings and ball joints, the steering is pretty heavy, but I'm expecting that to loosen up as things wear in. 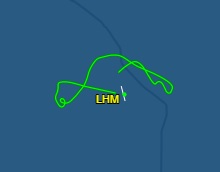 I was supposed to be meeting Chris for lunch, so when I heard him on the radio, I started heading back.  I landed and put the plane back in the hangar, then texted him.  He was in Rio Linda, which has the same frequency as Lincoln, which is why I hadn't heard him in the pattern.  Still, he showed up a while later and went through his logbook endorsements to do his private pilot's practical test (like me, he's a sport pilot right now), by which time he had to leave to get back to Cameron Park before it got dark.