I've been tinkering with GoPro videos and trying to get the telemetry out of them - I'd thought it was in the .LRV files, but it's mostly in the .MP4s themselves.  Having managed to get that to show up, the altitude seems to be wildly inaccurate, like by thousands of feet.  I'll have to look into this further to see if there's something I'm missing.

We balanced the blade on the AC fan, so that hopefully that'll be a lot quieter now... there was a lot of vibration from when I replaced the motor, and pulled the fan off the old one.

In the afternoon, I went and met Randy at the airport so we could fly with his neighbour.  We went over to Folsom Lake, then flew up the North fork canyon and over the Foresthill Bridge, before heading back to Lincoln. 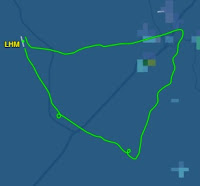