We started really early at the airport, flying to Placerville for their Young Eagles event.  I'd decided that if we were going to be flying East that early, we'd take off a little earlier still and see the sun come up from the air.

Rather than base at the EAA hangar, they were based by the fuel island - Randy missed this completely and started taxying for the West hangars, so I had to call him on the radio to come back.

It was pretty busy for us gyro pilots - I don't know about everybody else.  There were supposedly 33 kids, and 10 pilots.  2 of us were gyros (Chris was busy in the early morning).  I flew 5, and Randy flew 4, so I feel that we more than pulled our weight again :o)  Shane and Lisa drove over with gas cans and step ladders, and helped out loading kids and answering questions - I like it when I don't have to talk to people :o) 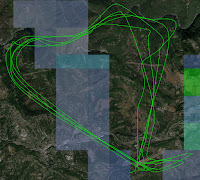 I think I was pretty precise in my flights :o)

Chris showed up pretty much as everything was done, and we gathered everybody together and headed down the hill to the taqueria there for lunch - everybody had eaten the EAA out of everything at the barbecue.

After lunch, Randy and I headed home.  We were getting buffeted by the wind coming over the hills, so rather than go over the headlands by Folsom lake, I suggested we run the South fork of the American River to the lake, then head back from there.  There was a band of smoke over Rocklin that made my eyes sting, but luckily that was done with by the time we got to Lincoln.

The "support" people at GoPro asked me to try shooting without the image stabilisation turned on, so one of my flights, I did just that.  As expected, it's unwatchable.

I figured the next thing they're going to ask for is the "standard" stabilisation, rather than "high" (which is how it comes out of the box), so I shot that on the way home.

I also shot the sunrise (with the trusty old GoPro 7), so I threw that into a video too while I was at it...