Tilly's back to waking up to go out at night (as she was before The Event) but at least I don't have to go out with her any more :o)

I had the day off to get some stuff done, and after I'd cut the grass, dropped off the recycling and been to the dentist, I went to the airport and tinkered with the brakes a little - it's occurred to me that they're always on slightly, so I've been tweaking cable tension and piston preloads trying to fix that.  They still squeaked when I went out for a flight, but I'm telling myself they're better.  I've ordered the O rings for a(nother) total rebuild, but they won't be here until the weekend. 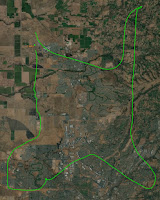