I got up and headed to the airport.  A couple of the guys were talking about going to Petaluma for lunch, but the forecast had said it was going to be misty there, so I'd been toying with flying with John in his Citabria.  The AWOS at Petaluma said the weather was just fine there, so I bundled up and took my plane - it took about an hour and ten minutes, with a bit of a tailwind.  When we were joining the pattern, there was a guy who joined just after me in a (much faster) Cardinal, but he let me go in front of him to land, rather than me extend out to Seattle so as to not clog up the pattern.

Coming back, there was a headwind, so it took an hour and a half or so, but we landed with lots of daylight left.  Enough that I flew over to Marysville to do a quick touch and go with Randy. 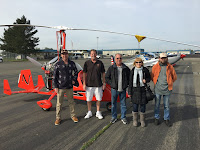