We went out to the airport early and pulled the brakes apart on the plane to clean and rebuild them with new O rings.  It seems to have fixed my dragging brake problems, so yay.
We met Randy for lunch, then Vic went home, and Randy and I went and installed a new brake cable on his plane, then went out for a quick flight. 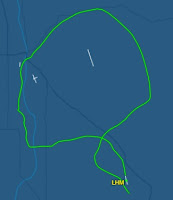 We flew all the way around Beale Air Force base, and part of the way around the Northern part, we were caught up by a guy in a Carbon Cub who was going to land on one of the sand bars and go fishing.  We followed him to where he was going to land, but there were some people already there, so he decided to head back and land somewhere else.  Eh, we headed back to Lincoln, landed and put everything away.
Posted by Dug at 4:47 PM