I went out to the airport and took the plane out for a couple of video things I wanted to shoot.  I did an orbit over Randy's, but nobody came out and waved at me.  Vic and Tilly waved at me at home, so I did another orbit there, and then I did an orbit for spacing from somebody doing a low pass at Lincoln - I'm used to people doing that in T-6s and the like, not in a bloody 172. 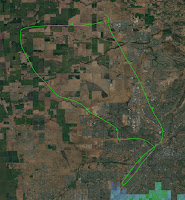 When I got back, I had a long chat with with Ernie about his newly built RV-14 while the oil drained out for its second oil change.

Chris rang, to see what I was doing, so we agreed to meet up at Wings for lunch.  Just after I pushed the plane out of the hangar again, it started to rain, so I pushed it back in and closed the hangar, so it stopped.  Still, I drove up instead.  There were a couple of short showers, but I figure I don't need to fly in the rain, so why would I?

When I got home, I threw together a couple of videos...

A fly past of the Roseville Train Yard

The area burnt in yesterday's fire at Lincoln Airport.