Today was Thanksgiving, ie a day off work.  I flew over to Cameron Park. 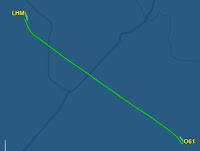 It was pretty windy, so I managed to take off in about 30'.  I was at about 800' by midfield, so I turned an early crosswind and headed South East - I managed to hit almost 100mph on downwind, but was tacking across the wind the rest of the way there.  We tinkered about with Chris' plane for a bit, and even had it fired up and running.  We've found an oil leak :o(

I flew back into the headwind the whole way, I meandered along looking at things.

Did I say a headwind?  Here's what I mean:

While I was 3 miles to the East, there was a guy on finals for a straight in landing - he was a little worried that I'd be in the pattern as he landed, and I told him I was showing less than 40kt ground speed.  He landed as I came over the airport.  Again, I was really fast downwind, and I landed at about 13mph ground speed and let the rotor spin down before taxying back to the hangar.

At home, we had turkey and watched "The Iron Mask".