I started the day at the airport, changing the air filter on the plane - I've bought a spare :o).  I was meeting Chris at Auburn, but wanted to fly over Vic and Laura at the farmer's market in Roseville first, so I headed out early.  Having done my flypast, I thought  I'd go and find Chris leaving Cameron Park, but as I got close to a very smoky Folsom Lake, I could see a Chinook pulling water out of the lake and dumping it on the peninsula that runs towards the dam, and a UH-1 flying above it.  I decided to bail out and leave them to it, so I headed to Auburn then, getting there about 5 minutes before Vic, and 20 minutes or so before Chris :o) 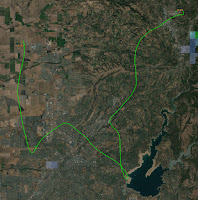 When we were done at Wings, I flew roughly towards Jimmy's house as he's been on about a fly-past, then headed back to Lincoln.  There was a guy ahead of me heading in who turned away because it was "too busy"... the two of us heading in, one guy doing circuits and two guys leaving.  That's not even close to busy at Lincoln at the weekend :o)

I cleaned my old air filter and left it to dry thoroughly, then went home and did some updates to the EAA web site.

I also threw together some footage of Folsom Lake going dry...