It was Labo(u)r Day, when Americans remember the advances brought about by the unions by going shopping.

Tilly's leg is obviously feeling much better today.  After feeding her, I started the day proper at the airport, flying a friend of Vic's in the gyro over Folsom Puddle. 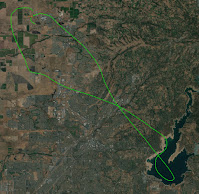 When I saw Chris heading to meet us at Lincoln, we followed him back.  Jarron landed right behind us, and was followed by the CHP's air unit, as he busted the TFR for the Bridge fire up in Auburn :o(

Once we were all ready, Chris, Randy and I flew up to Oroville for lunch - as usual we were too low to show up most of the way, but Chris (who uses 1090 rather than UAT) showed up.

After lunch, we flew back, talking to ATC to go straight over Beale Air Force Base.  I'd hoped to get footage on the GoPro, but after the Folsom flight, the battery died well before we got to the "flying along the taxiway" bit :o(  Hopefully Chris got some footage on his GoPro.

When I got home, Vic was out, and Tilly was sleeping.  I woke Tilly up, and we went to find Vic in the park by the school, playing with her hang glider.  After several runs, we put it away and pulled it home on her gardening cart.
Posted by Dug at 7:41 PM