I'd been thinking I'd have a quiet day, so I started out taking Tilly to the park.  We walked around while she yelled at the kids to get off her lawn, and stole a ball from a black Labrador.

Chris' planned trip to Santa Barbara didn't happen, so he suggested lunch at Auburn.  Fine, I'll see you there :o) 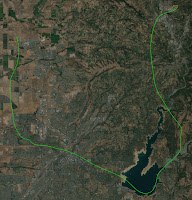 I took a meandering route there as I had time to kill.  Bill also came and met us there.  Shame Wings was closed :o(

We decided to head to Oroville, as the golf course is always open.  Bill and Chris were in their RVs, so I was bringing up the rear.  I had thought about dropping the gyro at Lincoln, but figured it would be quicker to just fly it to Oroville.

It was very gusty and blustery, so I headed down to the flat land before going North, rather than have the crap beaten out of me the whole way there.  Chris ordered for me, and I arrived just as lunch was brought out :o) 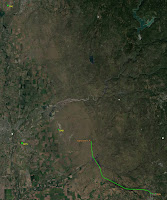 After lunch, I flew back - the other side of Beale so hopefully it wasn't as bumpy.  It was still pretty bumpy.

Shane was at the hangar, getting ready for a lesson, so after I'd put my plane away, I went through a bunch of stuff with him.  When Ken arrived, and Shane left for a flight, I headed home.
So much for a quiet day :o)
Posted by Dug at 7:18 PM