We were all going to meet up at Auburn for breakfast, and Chris was bringing his daughter.  As Vic had decided to ride up on her motorcycle, I offered to collect Chris' wife from Cameron Park if she wanted to join us, and she took me up on the offer.  I landed downwind, because the guy before me landed downwind, but everything was OK, it just wasn't a great landing.  We all loaded up and flew to Auburn, where we landed downwind because people were landing downwind.  Again, not a great landing.

After breakfast, I flew Jackie back to Cameron Park, and landed upwind.  Thankfully it was a much better landing :o) 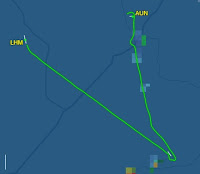