Well, autumn's arrived with a bang.

The smoke's mostly cleared, so we'd talked about flying.  Chris and Randy wanted to do lunch, but I was out at the airport earlier than that.  I tinkered about for a bit, then flew towards Chris to catch him shortly after he took off and followed him back to Lincoln. 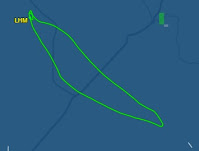 We decided to go to Oroville, as we haven't been able to get there for a few months due to the smoke.  This is actually Chris' track, as our UAT transmitters don't do as well in the hills as his 1090 :o)

We landed on 13, but immediately wanted to turn off on to 20 to taxi to the golf club - can't do that in a Cessna :o)

Randy landed first, then I put my wheels right on the white line (you're not supposed to land on the yellow arrowed bit) and easily slowed down before turning right.

After lunch we ran in to a really enthusiastic trike flyer, who'd driven over from the other side of the airport to look at the gyros.  He hung around to watch us take off - we decided to leave from 20 as there was a twin lining up to use it, and headed towards home.  There's a new(?) fire to the West of Beale that's started to cloud up the air again :o(

We'd agreed to call Beale Air Force base and try to do a low pass along the runway, but they didn't answer.  Nor Cal approach did, and they cleared us to fly through, so we did, at around 800'.  There were 2 U2s, some KC-135s and a bunch of Global Hawk drones.  Those things are huge, as you can see on Google Maps.  This is partly Chris' track, as Randy and I had our transponders turned off to avoid too much noise for Nor Cal.

Chris broke off as we approached Lincoln, and Randy and I put the planes away.

Chris has posted the pictures he took to a Google photos share.

The van has a slow puncture on one tyre, but I don't think they'll fix it as the tyres are so damned old.  I'd been planning on getting new tyres some time soon, so I guess that time's now :o(