I started the day early, flying over to Cameron Park to pick up Chris. 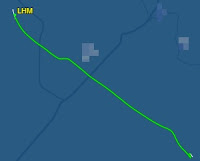 Once he was all loaded on board, we flew down to Byron.

We met up with a bunch of guys from Cameron Park, and had a look at the Patriot Jet Team's hangar.

When we were all done, some of the guys were talking about flying to Merced for lunch.  Sure, it's a few minutes in a Sabreliner, but that was going to take us another hour, and an hour further away from home.  I flew us back to Cameron Park.

We took Chris' car and went to a pizza place he likes near the airport, then he dropped me back so he could pick up the horizontal stabiliser for his RV-6 and take it to Rio Linda.  By car.  I flew back to Lincoln, via the house.