Chris, Henry and Randy were heading to Half Moon Bay, and I didn't feel like getting out that early, so I pottered around the house and went out to the airport later.  I did a short flight, then changed the left hand tyre as the old one has some flat spots on it. 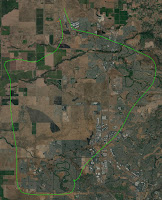 I was just finishing up as Randy and Henry got back - they'd only got to Petaluma and tooled around there for a while.  Chris had got to Half Moon Bay (despite the fog) but he was in an RV-12 that he's going to be helping sell.