Randy came and picked me up, and we met Henry, Shane and Liza at the airport.  We had originally intended to fly to Lampson, but as we'd had the crap beaten out of us on our last couple of cross country flights, we decided to try Nut Tree, with a divert to Sutter if it was too turbulent. 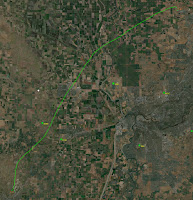 It wasn't turbulent, so we got to Nut Tree, and met Steve, another MTO pilot, from Petaluma.

After lunch, it was decided to stop at Woodland on the way back, and Steve said he'd fly there with us.

When we were setting up to leave, us to Lincoln, Steve to Petaluma, Steve's pre-rotator broke - it's a mechanical linkage on the Autogyros, and the link pin had failed.  We explained to him that he could manually pre-rotate, and Randy span the rotor up, to about 20rpm, and left him to run down the runway.  One of the issues with the Autogyro is that it has a pneumatic, push button pre-rotator, and it seems Steve doesn't understand how pre-rotation works, as he slammed the cyclic back and the propeller hit the rotor.  We were amazed that the design would allow that to happen.  Oh well... we found space in a hangar for him (George, a Magni pilot allowed him in,) and Randy flew him back to Nut Tree to get picked up to go home.  Shane, Liza and I flew back to Lincoln and waited for Henry and Randy to get back.