We got up early and took the plane to Auburn for breakfast.  It was a little busy getting there, as everybody seemed to have the same idea, but everything worked out OK.  I did a pretty short landing, so we could get off at the first taxiway, and it wasn't until we were standing at the restaurant watching everybody else that Vic realised how bumpy it was out there.  Our landing back at Lincoln was a thing of beauty :o) 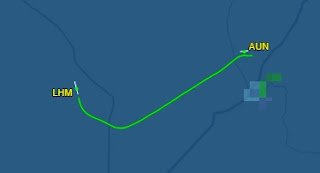 In the afternoon I built a proof of concept for a table that Vic wants for a plant by her desk at work, but she declared it good enough by itself, and put it in the car to go to work with her tomorrow.
Posted by Dug at 9:20 AM