I'd agreed to fly Steve's future father in law, so I started the day going to the airport and off we went.  We flew around in a big circle, and flew over Gladding McBean in Lincoln, as he wanted to do that, but Steve can't fly over stuff in his powered parachute. 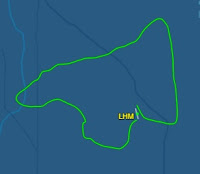 When we got back, I took his girlfriend up for a quick circuit, as she didn't want to fly for long.  Eh, the plane was out, so it wasn't a big deal.

Randy rejoined us at the airport, and after Steve and co had left, we flew up to Auburn to meet Chris for lunch.

After lunch, we flew back to Lincoln, where I started doing some servicing on the plane.

I changed the oil, spark plugs, main tyres, cleaned the air filter, retorqued stuff until I was pretty much done with the damn stupid heat.