I met Randy at the airport, and we flew up to Auburn for brunch.

Chris had lent me his Insta 360, so I strapped that to the gyro in front of the airbox (like he'd had it on his gyro in the past), and left it recording when we were flying.  Chris has had problems with it cutting out, but I found that you need a really fast Micro-SD card, and bought a two-pack.  So, this was the first test away from my desk.  It recorded just fine all day - I recharged it while we ate.  We flew the North Fork down to Folsom Lake, then over to do a lap of Chris' house and then home along part of the South Fork. 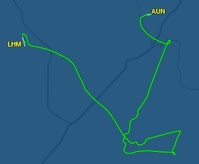 Randy came over, and we looked at the footage I'd shot - there's a jello-effect that makes me think I need to shorten the arm of the monopod it's mounted to.  Oh, and it would be nice to mount it on the left hand side so you're looking at the airport when you're in the pattern.  Doh.  Didn't get around to putting anything on YouTube yet.