Chris was over at Lincoln talking to Bruce about electronic ignition systems, as one of his magnetos is due for a rebuild.  Once we were all done, we flew up to Auburn for breakfast - we put my GoPro on Randy's plane so he can watch himself take off and land, and I used Chris' Insta 360.  I threw in a little orbit just West of Auburn for some separation from Randy, and it's funny watching it on the Insta :)

Dave enjoyed the take off 360, so I figured I'd do a landing 360.
After breakfast, Randy and I flew down the North Fork and then to Cameron Park to drop off the camera with Chris - my plane's due for its annual tomorrow, so I don't know how long I won't be flying.  I'm hoping not long.

Randy followed me (I usually follow him) so we could try and see me on the video from his plane, and I could use the Insta to look back at him.  At Cameron Park, we left the camera with Chris, then headed back to Lincoln. 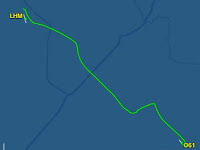 After putting the planes away, we headed back to look at the video we'd shot - there's still jello-effect, so it's not the length of the mount, but its location.  Henry has a mount somewhere around the passenger seat, so I'll look at that maybe some time.  Or just bring a passenger to hold the thing out the side :o)