I left the house early and met Shane at the airport.  We flew over to Cameron Park.  I'd said to Shane about taking the camera, and we both agreed it wasn't worth the hassle.  So obviously there was a house on fire in Lincoln that we flew past. 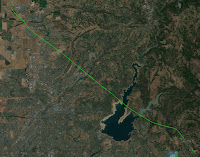 At Cameron Park we looked at one of Chris' wheels that had been juddering - we jacked the plane up and span the wheel, noticing that the tyre wasn't even close to round.  Luckily Chris had a spare, so we installed that and went to lunch with PJ. 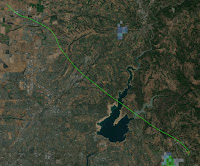 After lunch, we flew back to Lincoln.  It was bumpy, as the weather's changing right now - there's talk of rain in the next few days.

Shane's plane was due for its 25 hour service, which is just a bunch of torque settings to check.  As we were finishing that, Chris arrived.  His wheel was better, but not fixed completely, so there are some axle bolts he wants to look at when he gets home.