The smoke seemed to have finally cleared, so Randy and I met at the airport.  The smoke was looking pretty bad, so we gave up on going to Petaluma and decided to just loop Beale.  Well, as we got under Beale airspace, I suggested we turn around, as the visibility was getting noticeably worse.  We decided to head for Far West Lake to the East of us, but gave up on that soon, too.  We thought we'd go South and fly over our houses, and eventually had to give up on that and just went back to the airport, where we parked up and went for lunch at Mary's. 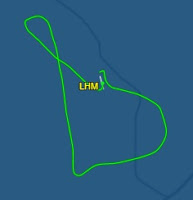