Randy and I met at the airport to tinker with the planes, then went out for a flight.  The cafe at Auburn is closed this weekend, so we figured we'd meet Chris at Cameron Park and fly back to Lincoln, then have lunch there.  I wanted to fly over Don's house, so I put what I believe to be the GPS coordinates in, and we headed out.  The wind was blowing from the North, so the smoke is starting to come back in, but because the AWOS was calling calm winds, everybody was using 15.  So we took off downwind, and shortly after that, they changed the runway.

Randy had texted Chris to say we'd meet in the air, and I announced on the radio that we were passing overhead (we could see Chris' gyro ready to go), then heading to the West and out to the lake.  We were puttering around over the lake (I got down to 29mph ground speed per Flightaware without really trying, as there was quite a strong headwind) and Randy texted Chris to see where he was, as he hadn't taken off yet - he still thought we were landing.  So, we toddled back to Lincoln and put the gyros away, just in time to close up the hangar and head over to Mary's. 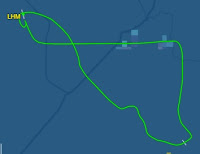 After lunch, we all headed to our respective homes, and I started playing with a bracket to replace the broken carb drip tray on the plane.  Hopefully I can get that installed tomorrow and fly again.