Sutter were having a display day, so Chris stopped at Lincoln and we took the gyroplanes over for lunch.  Bruce flew his Cardinal over too, so he could get a display day sign off, and complained and complained about how bumpy it was flying under 1600' to be below the Beale shelf :o)  I flew South of the airport to do a 45 degree join to their (right hand) pattern, and Chris did an overhead join, so he got there before me. 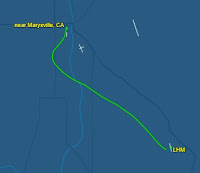 Chris and I spent quite a while talking about gyros, and were the last people to get lunch.  One of the Sutter organisers, Carin, asked if we'd take a look at a gyroplane she'd had in her hangar for years from her uncle.  It looks like a Bandit, and we chatted about it for a while - they want to sell it, and I also suggested seeing if the McClellan museum might take it as a donation.

We flew back along the Feather River to Bear Creek, then headed back to Lincoln. 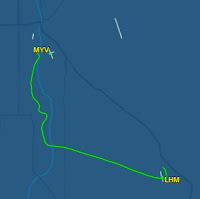 Chris had a problem with a fuse holder in his dashboard a while back, and I jumped past it (so the line is unfused) as a test.  Well, everything's working fine now, so he bought some circuit breakers.  He brought those, along with crimping tools and so on with him, so we replaced the 3 fuses in his panel with circuit breakers.  I checked when he'd got home, and everything was still working fine, so I believe myself to be up to date with everybody else's aircraft projects :o)