I went over to the airport and cleaned the plane while waiting for Randy.  We changed his rod end ball joints, and now, as far as I'm concerned, he's ready for his annual inspection - he can change his own damned oil.

We had lunch at the Spitfire, then Randy headed off home to put up his new TV.  I went back to the hangar and took the plane out for a quick flight... it was pretty windy, but there were a load of people in the pattern, making it interesting joining again to land. 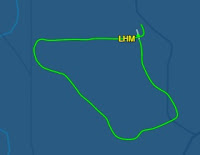 Tilly's been throwing up today, and this evening she horked up a large, pinkish thing.  We're hoping that was the cause of all this, as she was instantly feeling better.  No idea what it was though.
Posted by Dug at 3:47 PM