I started the day hacking the grass in the garden, and after pottering around, we went and met Chris for lunch, as he was in Roseville getting his guitar tuned.

After that, I went to the airport and took the plane out for a quick flight to beat the rapidly worsening weather. 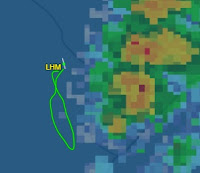 There was a 172 doing circuits on runway 15 when I left, and the wind was blowing around 12mph from 250 - ie the wrong runway.  Still, I sucked it up and took off, but when I was on my way back, it was now 12mph at 260, so I called and suggested we use the correct runway, 33.  He agreed, and I said to sort himself out and I'd come in behind him.  The instructor then piped up and said it was more or less across the runway, so to use 15.  Fine, I'll do an overhead join and bitch about you later.  Oh no, as I was heading North to do the overhead join, I saw them stopped on the runway.  Then they called to say they were heading back to the hangar.  Sigh.  I did an extended base leg and landed on 33, then taxied back and put the plane away.  It threw it down on the way home, but when I got to Foothills Blvd, it was totally dry.
Posted by Dug at 3:39 PM