I got to Randy's early to pick him up, but he wanted to haul 20 gallons of gas, so we took his truck to the airport.  We got our stuff packed up and flew to Placerville for their Young Eagles event, getting there pretty early (Judi had said the pilot briefing was 08:00, but it turned out to be closer to 08:45).

Chris joined us, and the gyros then flew 4 kids each (everybody else did 3 at most) - we'd agreed we'd fly North of the airport to keep out of everybody else's way :o) 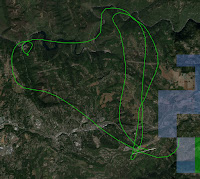 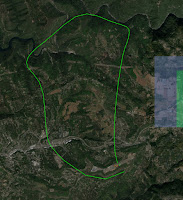 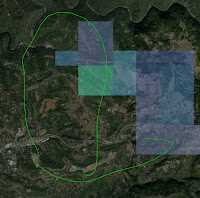 My favourite kid was probably the last one, as he's afraid of heights, so I said we could land at any time - he really enjoyed the flight :o)
When it was all over, we flew back to Lincoln - it was much bumpier, and I guess I'd got used to having extra weight to damp out the thermals and gusts.  Still, it was like 14:00, so I'd have been at home if I was still flying the Flightstar.

Randy drove me home, and we watched "Tenet," a movie he's been on at us to watch since he saw it at the cinema.
After the movie, we went back to his place to look at his breaker boxes - he's set his mind to getting an electric car, and wants to install a level 2 charger in preparation, so we peered at things and made plans.  I'm not making up a shopping list until we've taken the covers off everything, but we want to shut the power down to the house to do that.
Posted by Dug at 8:46 AM