I'm off this week to get some things and stuff done.  I'd been supposed to meet Randy, but he wasn't feeling well after a dodgy taco or something, so I figured I'd start installing the new toilet in the guest bathroom - Vic had pointed out that it didn't flush properly, and was talking about trying to unblock it.  I suggested it would be easier to just replace it - it's over 25 years old, after all.  Anyway, I pulled the old one out, then went and tinkered around on the interwebs for a bit.  Then I figured I'd see how I did installing the new one (they're heavy) by myself.  I got it all installed and bolted together, then ran into a problem (other than the wall where the old tank was needing painting) - the water hose isn't long enough. 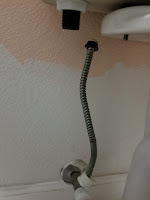 It's not as easy as just replacing the hose, as it's all one unit, including the tap, so I need to turn the water to the house off.  I went and got the parts I needed, then went to the airport and took the plane out for a while - I flew over Randy's, Chris' and Vic's work, but nobody came out and waved at me, so I went back to Lincoln. 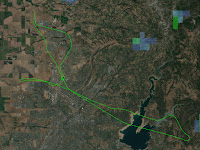 When I got home, we shut off the water and installed the new hose for the toilet.  I couldn't get the old olive out, and the tap leaked the first time we turned it on.  We tightened it up a ridiculous amount, and it seems fine now.  The new toilet's a lot quieter than the old one :o)