We got up and headed out to Folsom to pick up Vic's new bicycle at Folsom, then went home.  I headed out to the airport to fly to Auburn, and Vic rode her motorcycle up to meet Chris and Tim.  I was early, so I may have meandered around a little on the way :o)

I followed Jimmy in, in his Q200, and he parked over where we usually stop to say "hi".

There was also a couple of guys in a CGS Hawk and Team Mini-MAX, but I didn't see them to say "hi."  We've seen the aircraft before, we just don't know where they're based.

Dave and family were at the driving range in Roseville for somebodyorother's birthday, so I flew over there on the way home. 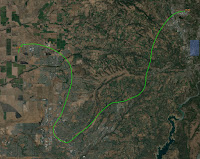 I chatted to a guy flying in in a Bonanza, to start with I pointed out that the wind was favouring (just) 33, and offered to orbit so he could fly straight in (he was coming from the South.)  He landed after me, and said he'd hit my rotor wake (doubtful, but I humoured him) on finals, and his stall warner had gone off :o)
Before leaving the airport, I went to see Tony, and find out what the Cherokee was doing in the field just to the East of the airport.  Seems the kid had fuel starvation (we won't suggest he ran the tank dry just yet) and dumped it into the field.  Sounds like it's a write off :o(
Posted by Dug at 5:57 PM