Today was Memorial Day, when Americans honour their war dead by going shopping.

Randy and I had talked about flying early, so he texted me first thing, and I picked him up on the way to the airport.  We flew a big loop around the Beale class C airspace. 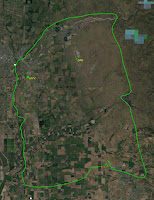 I stopped at his place on the way home, as he's trying to convince himself, and his wife, that they want an electric car.  So Elise, and then Randy, drove around playing with the regenerative braking and suchlike.  He also checked the interior leg room with him in the front seat and his freakishly tall teenage son in the back.  It passed, so they're going to carry on looking at them.

After tinkering around at home for a little while, we went and met Randy and Elise for lunch before coming home to stay out of the heat.