Chris was wanting to take the RV-6A out for a proper trip, and I mentioned it to Bill, and he was interested in joining us.  The plan was initially to go to Half Moon Bay, but the weather there wasn't flyable, so we decided to go to Hollister instead, to see Chris' friend Jeff.  Part way there, Jeff texted to tell Chris he was going to Watsonville, so we diverted to go there.  We got there at 150mph before Jeff in his 100mph Cessna 140, and bimbled around the place until Chris got a delayed message from Jeff to say he was at Hollister, and the P-51 and L-39 based there were going to be flying.  So, we paused briefly to watch a gender reveal thing (they dumped blue powder from a helicopter) at Watsonville, then flew to Hollister just in time to watch them take off. 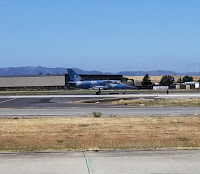 After lunch, we went and looked at the T-6 in Jeff's hangar, which is in much better condition than the very similar SNJ in our hangar, then flew back to Lincoln.