Chris and I had decided to go to the Georgetown Fly-In, and we were going to camp there overnight.  I spent a little time getting all my stuff together, then headed for the airport. 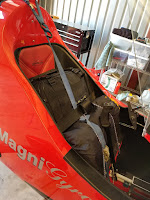 I managed to get everything packed into the plane pretty well, and then I was early, so rather than meet Chris at Auburn, I figured I'd fly to Cameron Park and we could fly to Georgetown from there.  Just as I got to Cameron Park, he texted me to say he was running late, so I opened his hangar and waited a few minutes for him to get there.  We got t'other Chris' SportStar out, then pulled his gyro out and put the SportStar away.  The flight towards Georgetown was uneventful, but the airspace was busy there, so we got split up by other arriving aircraft.

I wondered why Chris was getting off at the end of the runway, rather than the first turn off, but when I got down there, it was because there was a plane waiting to take to the runway and back-taxi, so I had to fly a bit further and get off at the end too.

We got directed to a parking area at the front, just behind the Cal-Fire FireHawk helicopter, so we spent the rest of the day talking to people and trying to stop kids from playing with all the switches and controls.  T'other Chris flew over in the SportStar, but he was directed to park on the other side of the runway, because who wants to look at a SportStar?

When everything wound down, I went to put my tent up, and just as I got to the camp area, Randy flew over - he'd come after work, so we walked the flight line and sat around until it was too dark to do anything.