Chris and I agreed to meet up at Auburn.  It was pretty bloody windy, and I left Lincoln early.  I had thought I'd run around a little hill North of Camp Far West Lake, and then run up the Bear Creek canyon, but it was a bit too windy for that.  I just pottered back South and headed up as normal. 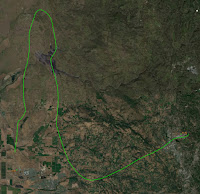 Wings was closed, which was an annoyance.  We walked over to the bar just behind the airport, but they weren't doing food until 12.  So we walked to the golf course, and found they were doing an event at $40 a head, and we weren't really dressed for it.  So we walked back and killed time until the food truck at the bar opened.

After lunch Chris headed back to Lincoln so I could give him some Dexcool for the radiator on his gyro, and we stood and talked to Tony for a while before heading home.